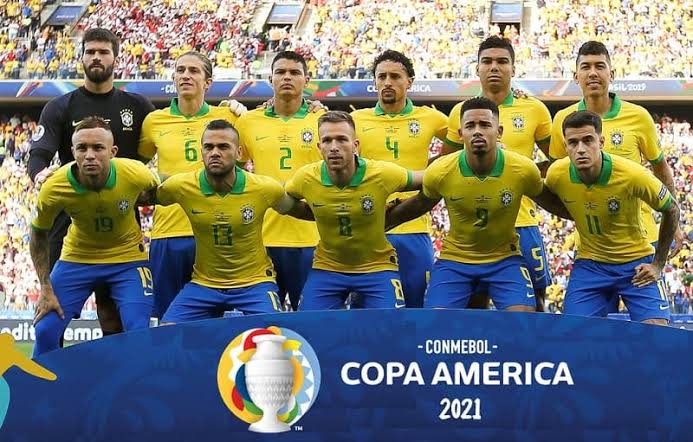 Brazil to become the first side to qualify for the Copa America knock-out stages following a 4-0 win over Peru in Rio de Janeiro on Thursday.

Goals from Alex Sandro, Neymar, Everton Ribeiro and Richarlison gave the holders a ninth straight win and a perfect six points from two games in Group B as Peru dropped to the bottom.

There was little between the two sides in the first half but Brazil’s greater quality made the difference after the break as talisman Neymar inspired them to an ultimately comfortable victory.

“It’s emotional for me because many things happened in these last two years that were difficult, complicated,” said Neymar as the tears flowed.

Two years ago he missed Brazil’s Copa triumph on home soil through injury, although before the tournament began he was accused of rape, a case that was dismissed over a lack of evidence.

His 68th goal in 107 games for his country took him to within nine of the record set by Brazil great Pele.

“It’s an honour for me to be part of the Brazilian national team history.

To be honest, my dream was always to play for the Selecao, to wear this jersey. I never imagined achieving these numbers.”

It took Brazil 10 minutes to get a shot on goal, and
when they did it came from the unlikely boot of
defensive midfielder Fred, who fired over.

A minute later the Selecao were in front as Everton’s cross from the left skimmed off a Peru head and landed at the feet of Gabriel Jesus at the back post.

Fabinho was next to test his sights but fizzed a drive from 25 yards just wide.

It was a cagey affair, with Peru enjoying the greater possession but neither side really threatened again until the stroke of halftime when Alex Sandro shot over from the edge of the box.