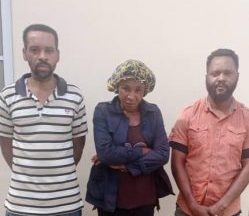 The General Overseer of Resurrection Power Church in Nasarawa State, Pastor Richard Onyekachukwu, 47, has been arrested for staging his own abduction in order to make his brother pay a ransom of N10 million.

The fake abduction was uncovered by operatives of the Force Intelligence Response Team, who arrested the General Overseer.

Onyekachukwu executed the fake abduction plan along with his friend, Enoch Frank Nwaolisha, 39, who is the General Overseer of Christ Resurrection Power Gospel Church of All Nations.

Before Onyekachukwu’s arrest, his brother, Prosper, on June, 16, 2021, had reported to police that he had been kidnapped and his abductors were asking for N10 million ransom.

The FIRT got involved in the case following the order of the Inspector-General of Police, Alkali Baba, to the head of FIRT, a Deputy Commissioner of Police, Abba Kyari, that the Unit should investigate the kidnap of the GO and see to his rescue.

During investigation, the operatives visited the house of Onyekachukwu and met his wife, Mary, who surprisingly didn’t look worried or anxious that her husband was in the kidnappers’ den.

When she was asked a series of questions, she was evasive, but when she was told that her husband was wanted for armed robbery, she screamed, denying that the man was an armed robber.

The police said: “It was at that point that she screamed, insisting that her husband was not an armed robber.

“She told police that Richard travelled to Taraba State for a business trip.

“According to her, she saw Richard a week ago.

“Meanwhile his family thought he had been in the kidnappers’ den for three weeks.He was said to have been kidnapped on May 27, 2021.”

The operatives took Mary to the station for further interrogation.

She confessed that Onyekachukwu “kidnapped himself”.

She also explained that the General Overseer had financial challenges and had been looking for ways to raise money to offset his loans.

The source added: “She told police that Richard was due to visit the house, and based on that information, operatives laid ambush.

“Richard was picked up.

“He made a confessional statement and led the police to arrest his friend Enoch, who had been calling Prosper and asking for ransom.”

Onyekachukwu said: “I’m a pastor and a contractor.

“I have a big church, Resurrection Power Church, but the roof was blown off by the wind.

“I took some loans to assist the businesses that I was doing to support the ministry.

“The loans were about N600,000 and in the process, I had financial challenges.

“I made some losses in my poultry business and COVID-19 didn’t help matters.

“The banks were after me, and I didn’t know what to do.”

Onyekachukwu then thought of how to get money from his younger brother, Prosper, who is a rich civil servant.He decided to fake his kidnap.

But before then, he called his friend, Nwaolisha, and told him the plan.

Nwaolisha initially said it was a devilish idea, but his co-General Overseer soon convinced him to play ball.

Onyekachukwu said: “I told Enoch that even if my brother paid a million or N500,000 as ransom for my kidnap, I would be satisfied.

“In May, I travelled to the village to drop the corpse of our mother in the mortuary.I was supposed to return after a week.

“On the day I was supposed to return home, I couldn’t and there was a three-day delay.

“My phones were off and my wife couldn’t get me in those three days.

“She feared the worst and called my brothers, telling them that I was missing.

“When I eventually returned, I sneaked into the compound and dropped my bag, then went to the mountain to pray.

“I called Enoch, telling him that opportunity had presented itself.He then called and told them that I had been kidnapped.”

While feigning being kidnapped, Onyekachukwu alternated between sleeping in his house and that of Nwaolisha.

He further recounted: “I told my wife after a week, and this was because she had started suspecting my movements.

“I told her what was on ground, and that I didn’t know what to do.

“I told her that I needed to get money from Prosper before the banks came to embarrass us.”

Aside from owing banks, Onyekachukwu was also battling with how to raise money for his late mother’s burial.

He noted: “As an elder, I am expected to play a major role in my late mother’s burial.

“We had a family meeting and fixed a date, and everyone was running around to see how to raise money to contribute.

“I have no particular reason to request that my brother, Prosper, should bring the ransom money.

“I thought everything would end within the family.My plan was to inform him after the whole issue.

“Yes, my ransom target was N10 million, but my family bargained for N2 million.

“We were still waiting to hear from Prosper when the police arrested me.”

The suspect, who said he regretted his action, added that if he had asked for financial assistance from Prosper, he wouldn’t have assisted him.

He added: “I am close to my brother, so I expected that he would pay the ransom to save my life.”

Mary, who has been married to Onyekachukwu for nine years, said she’s a petty trader.

Mary said that she actually thought her husband had been abducted.

She narrated: “My husband told me that he would be travelling for a business trip on May 20.

“After some days, we couldn’t reach him and he didn’t return on the day he was supposed to.

“I called his brothers, but they said I should relax, that he would come home.

“It took about three days before someone called, saying that my husband had been kidnapped and asking for N10 million.

“However, a week later, Richard came home.I was happy, thinking he had been released.

“He then told me that since everyone believed that he had been kidnapped, I should not say anything till the ransom had been paid.

“When I tried to argue, he said I was stubborn.
I was confused and scared.”

Nwaolisha started his church two years before the COVID-19 lockdown.

The lockdown witnessed the dispersing of his members and soon he couldn’t pay rent, so he had to shut down the church.
He said: “Richard is my brother in the Lord.

“He told me about his financial challenges and how he owed micro fiancé banks.

“His landlord was on his neck and he was also looking for money to contribute towards his mother’s burial.

“He said he needed my assistance and that he wanted to ‘kidnap himself.’

“He said that he didn’t know what else to do and his brother didn’t like assisting him with money.

“He wanted to use the fake kidnap to get money from his brother.
“I agreed to help him.

“He wrote a script and gave it to me, which I acted out, including pretending to beat him up.

“We normally go close to the mountain to call his brother from there.

“Although we didn’t talk about sharing the formula of the ransom, there was, however, a silent agreement that I would get something.

“I wanted to use the money to head to the east for evangelism.”

Nwaolisha said since his church shutdown, he had been surviving by going for outreach programmes, where people would sow seeds and give offerings.