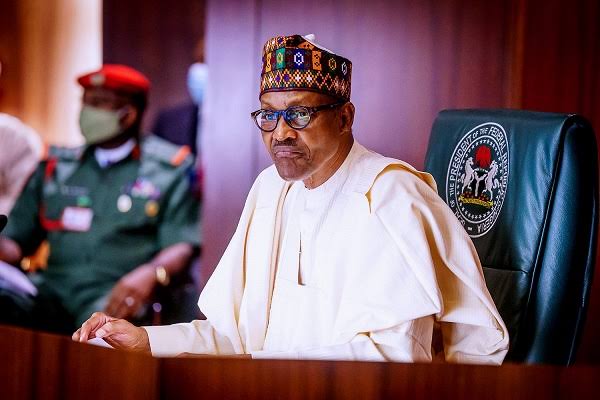 The President buttressed that drug war was dangerous than wars against insurgency and banditry because it targeted three generations for destruction.

The News Agency of Nigeria reports that the inauguration of WADA is in commemoration of the 2021 UN International Day Against Drug Abuse and Illicit Trafficking, with the theme: “Share Facts on Drugs. Save Lives.”

It is annually marked on June 26 to strengthen action and cooperation in achieving a world free of drug abuse.

According to President Buhari, the war against drug abuse and illicit trafficking is a war that must be fought by well-meaning citizens.

He said: “It is therefore my pleasure to declare on behalf of the good people of Nigeria, a War Against Drug Abuse, not just as a slogan, but a call for civil action for all Nigerians to take active part in this war.

“Let me say that this war is deadly than the insurgency we have in the Northeastern part of the country or the acts of banditry in the Northwest or acts of kidnapping that transcends all the geopolitical zones of this country because it is a war that is destroying three generations.

“So, this is a war that is targeting three generations in a stretch.

“I believe strongly that every effort must be put in place to ensure that we deal with the issues of substance abuse and trafficking and manufacture so that we can get to the root cause as ably elucidated by our keynote speaker this afternoon.

“I believe strongly, with every bit of conviction, that if we are able to deal with the issue of drug abuse, our security challenges will drastically reduce as we walk toward a drug-free Nigeria.”

Buhari, therefore, implored Nigerians from every strata of life, including traditional and religious leaders, local leadership at every level, to be vigilant and to support WADA.

Buhari charged the NDLEA to intensify efforts at ridding the country of criminal elements.

He added that criminal elements had made forest areas their hideouts, from where they had been launching criminal onslaughts as well as for farming marijuana.

He said: “I am directing the NDLEA to develop a robust risk-communication and community engagement strategy that will not only disseminate the four pillars of the plan to responsible entities, but deal with destroying production sites and laboratories.

“NDLEA should also break the supply chain, discourage drug use and prosecute offenders as well as traffickers, rehabilitate addicts and enforce relevant laws.

“I want to particularly draw the attention of the agency to the fact that the use of many of our forests as criminal hideouts is because large swathes of cannabis plantations are hidden deep within those forests.”

The President said his administration would continue to address underlying causes of drug abuse, including poverty reduction, “for which my pledge to lift 100 million Nigerians out of poverty in the next 10 years and strengthened by the recently developed National Poverty Reduction with Growth Strategy signposts my unwavering commitment.”

He appreciated stakeholders and international collaborators, especially the European Union and the UN Office for Drugs and Control for their unwavering support to the nation’s drug control efforts, including the development of a roadmap.

He also appreciated members of the inter-ministerial committee on drug control for their contributions and efforts to national drug control initiatives.

In his remarks, the Chairman of NDLEA, Retired Brigadier General Buba Marwa, said N90 billion worth of illicit drugs had so far been seized by the agency in the last five months.

According to him, over 2,180 traffickers have been arrested, including five drug barons controlling different cartels across Nigeria.

He also revealed that a record 2.05 million kilograms of drugs had been intercepted across the country and 2,100 drug offenders prosecuted with 500 sentenced to various jail terms by courts.

He said: “While the statistics are impressive, we wouldn’t deceive ourselves that we have succeeded in cleaning the Augean Stable in five months.

“We have only made a head start.

“We need to sustain the momentum.

“We need to win the drug war.

“We cannot afford to be complacent.”

In a goodwill message at the event, the Speaker of the House of Representatives, Femi Gbajabiamila, urged the President to give approval for the recruitment of 10,000 personnel for the NDLEA to address the manpower problem facing the agency.

According to him, the agency is currently “understaffed”, “underfunded” and “ill-equipped”.

Gbajabiamila, who was represented by Francis Agwu, Chairman, House Committee on Drugs and Narcotics, noted with concern that the NDLEA was using weapons used during the civil war.

He stated that the NDLEA must be provided with modern and sophisticated weapons to enable it to effectively address the menace of drug abuse in the country, as crimes were enabled by narcotics and drugs addiction.

He said the National Assembly was working to amend the Police Trust Fund Act to ensure that other policing agencies like NDLEA benefitted from the pool.

The Senate President, Ahmed Lawan, who was represented by Senator Ezekiah Dimka, Chairman, Senate Committee on Narcotic Drugs, underscored the need for individual and collective responsibilities to achieve the goal.

In his message, the UN Secretary General, Antonio Guterres, represented by Oliver Stolpe, the Country Representative of the UN Office on Drugs and Crime, urged law enforcement agents to go after the criminals at the upper level of the drug trafficking chain.