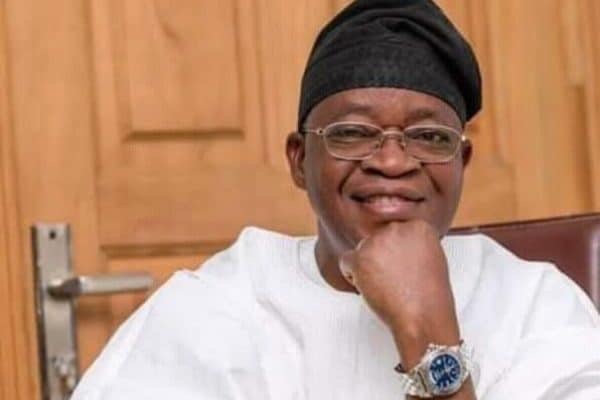 Governor Adegboyega Oyetola has explained why Osun State opted out of the joint ownership of Ladoke Akintola University of Technology (LAUTECH), Ogbomoso.

Oyetola spoke in Abuja while fielding questions at the NAN Forum, a special interview programme of the News Agency of Nigeria (NAN).

He said the decision was reached after his government weighed the options and discovered that it was more profitable to invest in its own new university than continue with the joint ownership with Oyo State.

The governor also cited the huge financial commitment and lopsidedness of faculties of the university as some of the reasons why it exited the joint ownership.

LAUTECH founded as Oyo State University of Technology in April 1990 was jointly owned by the Osun and Oyo states after the creation of the former on August 27, 1991.

The National Universities Commission (NUC) on November 20, 2020 announced the end of the joint ownership, with the university ceded to Oyo State, while the College of Health Technology was transferred to Osun.

Giving insight into the development, the governor said: “Even in marriage, there is room for divorce; so, you weigh your options.

“Don’t forget that we inherited LAUTECH because it was established at the time Osun was part of Oyo State.

“It was never a question of two states sitting down together saying we want to establish a university. No, we inherited it.

“At the time, they could not have broken it into two and say Osun take this, Oyo take that.

“Sometimes when you have different political parties being in charge of different states, there are always issues surrounding policies and related matters.

“LAUTECH had been in crisis over the years, as far back as when Governor (Olagunsoye) Oyinlola was in office with (Adebayo) Alao-Akala.

“They actually agreed to separate and there was a report to that effect. It was just at the point of implementation that the APC administration came in, so it was stalled.

“But I realised that the relationship was becoming a burden to Osun in the sense that we have our own university, which is Osun State University.

“I had to be compelled to pay the salaries of lecturers in LAUTECH, and even those of the teaching university located in Osogbo.

“Again, if you look at the issue of equitable distribution of the faculties, it was lopsided. Not less than nine were sited in Ogbomoso, for instance. We had only the School of Health in Osogbo.

“That doesn’t truly reflect the issue of joint ownership.

“So, lopsidedness in that area became an issue. And for me to be giving out about N700 million or thereabout per month to take care of our commitment to LAUTECH and the teaching hospital, I think it was burdensome.

“I have the Osun State University to think about. At some point there was this issue of states not meeting their financial obligations.

“That put so much pressure on our government, making it look as if we were the one not aligning or not making the university to develop.

“The best thing was to look at the whole thing again and mutually agree.

“It is in the interest of the students and the management of the university that it should have just one parent rather than two parents who may not be compatible sometimes and create unnecessary problems every time.”